Buy Tzolk'in: The Mayan Calendar at the lowest price 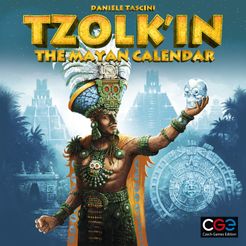 Tzolk'in is a dynamic worker placement game that sees each player as head of a Mayan tribe tasked with sending out their workers to increase the tribe's standing. What makes the game so dynamic you ask? Built into the board are a set of gears connected to a central calendar gear that is rotated at the end of every turn, thus moving the connected gears and any workers that may be on them.

Once the calendar gear has been fully rotated once the game ends and the player with the most victory points is the winner.

Players start Tzolki'in by assembling the board and setting the central 'calendar' gear to one of its green food days. In the lower right corner of the board, six monuments are randomly dealt onto the board, and six of the first stage buildings are also dealt out.

At the beginning of the game each player is given four starting tiles, from which they choose two. Those tiles then give you certain materials, corn, or technology to start with. If playing with less than four, players also add dummy workers to the board according to their starting tiles, these stay permanently on the board, blocking spots and making placing your own workers a little more difficult.

On your turn you must do one of two things: either you place workers on the board, or you pull workers off. When you place workers you have the option of placing as many as you have, you begin the game with three, with the ability to purchase a further three as the game goes on.

The first worker you place is free, however if you play more than one you will have to pay in corn. Placing two workers costs one corn, three costs three, four costs six, five is ten and six is fifteen corn. Those aren't the only costs involved in the game. Each spot on the board has a cost, the first spot on each cog is free, but it increases by one for each step you move around.

If you would like to place a worker, but do not have the food to do so, then you can beg for corn which angers the gods, dropping a step on one of the temple tracks and taking up to three corn from the bank.

Once each player has placed their workers, the turn ends and the central cog is moved one spot, which in turn rotates all of the smaller gears, moving placed workers. Four times per game the calendar gear will reach a food day, denoted by the blue and orange stickers on it's cogs.

On a food day at the end of a round you must feed your workers two corn each, losing three victory points for each worker you cannot afford to feed. Orange food days give you resources according to your position on the temple track, and green food days give you victory points instead. On the first green food day of the game you remove all of the first stage buildings from the board, and replace them with the better second stage buildings.

Each gear is named for a different Mayan settlement, and gives different actions. Yaxchilan (the brown gear) provides a range of resources, corn and crystal skulls, Palenque (the green gear) provides large quantities of corn and wood. To collect a resource in Palenque you remove one of the resource tiles and then retrieve the related goods, in the later spots forest tiles cover the corn tiles and must be removed before you can access the corn. You may directly retrieve the corn by burning the forest, but this angers the gods.

Tikal (the red gear) lets you build monuments or buildings and advance your technology. When you build a building, paying it's resource cost lighted on the top of it's card, you immediately gain it's effect, which is often resources or advancements in technology, but can also increase your place on the god track, allow you to build additional buildings or even provide recurring corn for use on a food day.

Monuments don't give an immediate bonus, instead gaining you victory points at the end of the game according to their conditions. At the end of a round in which a building was built that spot on the board will be replaced by another card from the building deck, but monuments are not replaced.

There are four different technology tracks, each of which is associated with a different gear on the board, usually gaining you additional resources or victory points when you receive something from the related gear. Each track has three available steps, the effects of which stack, and a fourth position which you can bounce up to, gaining its bonus immediately, before returning to the third step. When you increase a step on the track you must pay a number of resources of any type as listed along the top of the tracks.

Uxmal (the yellow gear) lets players exchange corn for resources, or vice-versa, gain additional workers or pay for buildings and actions on other gears with corn. Chichen Itza (the blue gear) allows you to spend a crystal skull in order to gain victory points and increase your position on the temple track.

When you pull a worker off of a spot, you perform the action as indicated by that spot. The longer you leave the workers on the cogs, generally the better the reward is. The last two spots on each cog are blanks, allowing you to choose any of the earlier actions.

If you are pushed past the action you want to take, you may pay one corn for each step back around the gear that required action is. Should a worker be moved past the last spot on a gear then they are pulled off the board and back into your supply with no action taken.

While you have the first player token you can go to the first player spot in order to pass the token to the next player and to move the central gear twice at the end of a turn, potentially skipping over food days. If you do this double progression you must turn your reference card to the darker side, and cannot do it again unless you satisfy certain requirements.

There are lots of ways that points are acquired through the game, mostly the way you'll be gaining those points are through buildings and monuments, from increasing on the temple tracks, and from dropping off crystal skulls on the Chichen Itza gear. The game ends after the end of the second green food day and the player with the most victory points is the winner.