Buy Risk at the lowest price 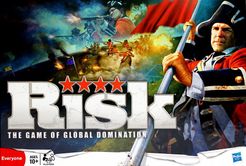 Risk is a very well known board game that is focused on tactics, and strategy. It was originally released in france in 1957 by a man named albert lamorisse. Risk the board game is based on conquering the world through strategy and the acquisition of opposing territories and armies.

It is played on a game board that depicts the world in six different continents, which are then further broken up into forty-two separate territories. Two to six people can play risk at one time since it is a game centered around people taking turns.

Each player controls a different army which he will use to pursue world domination via risk the board game. Players maneuver around based on rolling dice which allows them to move to different territories and increase the size of there respective empire.

Risk the board game is published by hasbro and winning moves games USA. It is a fairly simple game to set up and enjoy with friends or family. Actual set up time is estimated to be about five to fifteen minutes. Since risk is a game based around strategy, it can take anywhere from one to six hours to complete the game.

Players use five separate dice and a set of cards to determine where and how they will move around the game board. Risk the board game is great for sharpening your critical thinking skills since the game relies heavily upon: tactics, strategy, and negotiation.

Different armies are identified by plastic figurines that have different colors. In the earliest versions of the game players armies were depicted by wooden cubes and triangular prisms.

However, as time went on these figures were changed to plastic pieces shaped as roman numerals. In the most modern version of risk the board game armies are depicted as: infantry, cavalry, and artillery.

Forty-two cards represent the different territories that make up the geography of the game map. The other cards are depicted as infantry, cavalry, and artillery cards respectively to represent the soldiers each player commands. Each turn a player is given a card if they have successfully captured an opposing players territory.

Along with cards that represent soldiers, twenty-eight additional cards called mission cards are included to be used in a special variant of the game called secret mission risk.

Overall, risk the board game is truly a great exercise of mental wit. If you are thinking about playing this game it can increase your: creativity, critical thinking, and negotiation skills. However, you may want to think about playing different versions of the game since many licensed copies have been release under different themes of the original game.