Buy Memoir '44 at the lowest price 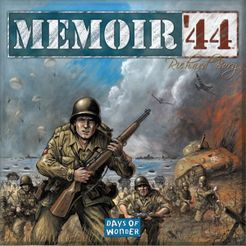 In Memoir '44, epic battles from World War II erupt on the beaches at Normandy or in the forests, hills, and towns of France and Germany in 1944.

To keep the often lop-sided scenarios fair, players usually switch sides and play the scenario again, adding up the points from both games to see who the best field general really is.

There have been plenty of war games released over the years, but Memoir '44 earns the distinction of being the best light war game yet released.

The tactical mechanics of the game are light enough that they do not bog the game down, but they still work for real wargamers because they are strong enough to provide a strategic challenge.

Although occasionally the luck factor can affect game play, a good general can usually compensate for the chaos of the battlefield. As is becoming the norm with Days of Wonder games, Memoir '44's components are amazing.

The game is less abstract than most other two-player games, and the varying scenarios keep it fresh and exciting, even if you've played it quite a few times. I think Memoir '44 will be a classic, it readily deserves the title of Best 2-Player Game of 2004.