Buy Mancala at the lowest price 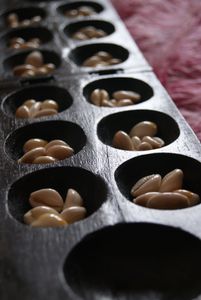 Place 4 stones in each small bowl. Do not place stones in the mancalas. Set aside any extra stones (you will not use these). Place the board between the players, with the mancalas on the left and right. To play, use the general rules plus one of the other sets of rules.


Object of the Game

Collect the most stones in your mancala (mancalas are the large bowls at each end of the board).

Each player "owns" the mancala on his right and the six small bowls closest to him (see Diagram 1). Player 1 starts by scooping up all the stones from one of his small bowls (players may never start from a mancala or from the opponent's six bowls).

If Player 1 reaches his own mancala, he drops a stone into it. Players do not drop stones into their opponents' mancalas, they skip them and continue dropping stones, one at a time, from their hand until they run out of stones. Players take turns moving. At the end of the game, players count the stones in their mancalas - the player with the most stones wins.

The game ends when one player no longer has stones in his small bowls. The other player (who still has stones on his side) places all remaining stones into his own mancala (it is not necessarily an advantage to be the first player to empty the six bowls).

Players may choose to move either to the right or to the left on each turn. Players may never start from a bowl with only one stone.

Note: I cannot answer questions about this game! The Ethiopian Rules seem popular but don't ask me!

For example, while Player 1 is dropping stones into the small bowls on Player 2's side, he drops a stone into a bowl that already has 3 stones. Player 2 picks up the 4 stones and puts them into his own mancala. The game ends when one player cannot move (no stones remain in that player's six bowls). The remaining stones on the other player's side are not placed in a mancala, and are not counted in determining a winner.