Buy Lords of Waterdeep at the lowest price 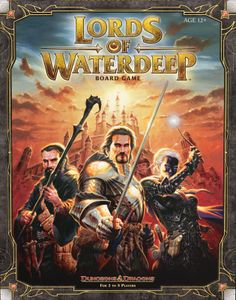 Lords of Waterdeep is a worker placement game, through and through. You'll use workers placed around the board to trigger different events. The goal is not to rack up a body count or hoard treasure like in a dungeon crawler, here it's all about victory points.

And while it takes place in the Dungeons and Dragons universe, the influence of the seminal RPG is minimal when it comes to gameplay rather taking the inspiration for the setting and activities be colored by DnD. Why, there aren't even any dice in the game! I know, it's craziness!

To start the game each player takes on the role of a various Lord of the town, drawn from a deck of many different potential Lords and kept secret from everyone else until the end of the game. Each Lord get a different bonus depending on how you play the game, so you want to keep each other guessing as to what your goals are.

You'll also choose a faction to represent, but the different choices don't confer any special abilities, just give you a color to represent yourself on the map.

Your clear task though is to exert the most influence over everyone else, exemplified by the victory points you'll be accruing over the course of the game. To that end you'll be deploying agents to various areas of the city to trigger certain events, engage in a bit of intrigue or betrayal or even hire adventurers to carry out certain quests for you.

That's right, you know all those times you were playing Dungeons and Dragons and you and your intrepid party accepted a quest from some Lord or Barkeep or what have you? Well, in an interesting flip you'll be playing as the people giving out those quests, not the ones having to go out and actually risk your neck.

So you'll acquire rogues, wizards, clerics and fighters as resources that you can then "spend" in a manner of speaking to have them complete different quests so you can reap the rewards… usually victory points or money or combination of the two.

The quests are represented as cards that you can collect when you send one of your agents to the inn (fitting). Each card lists the name of the quest, some flavor text, the requirements for completing it and what you get as a reward for doing so. Some quest cards are called Plot Quests and those will have ongoing effects that you'll be able to take advantage of for the rest of the game.

So each round of the game you'll take turns deploying your agents to different locations around Waterdeep, placing the pieces in the building and then carrying out it's effect. Some of them are simple, put an agent in the Grinning Lion's Tavern and take 2 rogues and place them in your tavern for example. Or maybe you decide to head to the shops and collect gold instead.

You can even play an agent to Waterdeep Castle to grab the first play token, meaning you will go first in each round till someone else steals it. Now, no one else can place an agent in those locations since they're being occupied. Some spaces, like Waterdeep Harbor, can hold up to 3 agents and let you play various Intrigue cards that can either help you or hurt your opponents.

One of the more interesting spots on the map is the Builder's Hall, which allows you to spend coin to erect new buildings in the town of Waterdeep, and thus offer more options to you and your opponents agents in the rounds ahead. When you build a building, you'll mark it with your factions seal showing you as the owner.

For the rest of the game when an opponent sends an agent there to reap the benefits of it, you'll also receive a little something for yourself. It's a brilliant give and take since the payoffs are better than the standard buildings but using them means your opponents will benefit as well.

Things progress pretty straightforward from there for 8 rounds. In the 5th round each player gets to add another agent to their agent pool, which gives you more choices each round but also makes it harder to gain access to all the locations you want since your opponents seem to always occupy them first. After 8 rounds or exerting influence and collecting victory points a winner is decided.

The game is really fantastically designed, truth be told. Even on our first play the rules settled in quickly and we all remarked how simple it was to pick and get going. I love the fact that your choices on what to do on your turn are limited to the basic buildings the first round or two, then expand as the game progresses as people construct buildings and the choices multiply and get a little more complicated. It's a great way to sort of ease you into the game.

The components and box insert are also absolutely top notch. I love the details in the gold pieces, different shapes and with the little holes in them. Even better are the building tiles, with little notches in the corners that perfectly fit the symbols of the different factions to show ownership. The game board reminds me of an old DnD style town map, with the major buildings drawn not to scale. It conveys a ton of info clearly and cleanly, no small feat.

Likewise the box insert might be the best I've ever come across. Everything has a place, and it all makes sense and fits well. The decks of cards have little notches cut in their holders to make it easy to grab them. The resources are in bowl shaped spaces, making them easy to grab.

Top to bottom it's just great. This may not seem like a big deal if you haven't bought a ton of games, but as someone that routinely has to chuck the insert and just bag the components cause of terrible design you learn to appreciate it when someone does it right.