Buy Glory to Rome at the lowest price 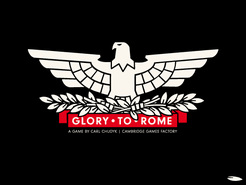 Glory to Rome is a fantastic game, yet this review will be tempered with dealing with a company that may struggle to keep its fanbase as this article unfolds. You see, many think that you can pledge money for a Kickstarter game and then they'll always get it, on time, without any problems. And while that line can blur often, it's not always the case. Sometimes, issues arise that may be out of the hands of the developer.

Glory to Rome is a card game about rebuilding ancient Rome after someone carelessly torched the city under Emperor Nero's nose (and violin). As contractors, you hire workers such as Architects, Craftsman, and Laborers to build various building structures (Coliseum, Viaducts, Scriptorium, and other buildings ending in –ium that no longer exist today). Legionnaires and Merchants help you fuel your own personal objectives and the contractor (player) that earns the most VP coins at the end of the game wins.

Glory to Rome plays a lot like San Juan and Race for the Galaxy, where cards are printed to have multiple exclusive uses. For example, a Yellow "Bar" card in hand can be used as the blueprints for building a Bar (dictated as the main picture), Rubble building material (at the bottom of the card), a Laborer role card (left hand side) or 1 VP coin when stashed in the player's vault (bottom right).

The main feature of the game revolves around the buildings of Rome and their abilities. Rome starts off empty. Players play building cards from their hands onto building sites. Buildings require one, two, or three building materials of the same color to complete. Only once a building is complete can the player can start using its special abilities and score VPs for it (the building site used for the structure is turned into VP coins).

On each player's turn, that player chooses and discards a card in their hand to "lead" a role. Each other player in turn either chooses to "follow" that role by discarding a card from their hand of that color or "think" and draw one or more cards from the draw pile. Then the active player (the "leader") and the players that chose to "follow" perform the role.

There are six roles in the game:

Patron (Purple): Choose a card from the central pool (which in effect is the discard pile for the game) and hire the client associated with that color card.

Laborer (Yellow): Choose a card from the central pool and put it into your resource pile (where it can be used as building materials towards your structures).

Craftsman (Brown): Choose a card from your hand. Either put it into play onto a building site or use it as a building resource towards a building already in play.

Legionnaire (Red): Show a card in your hand, then collect (demand) a card of the same color from the central pool and from each of your neighbour's hands. These cards then go into your resource stockpile.

Merchant (Blue): Choose a material in your resource stockpile and put it into your vault. Resources in your vault score VPs at the end of the game.

Whenever you choose not to follow a role, you 'think' which allows you to draw cards: A consistent flow of cards is needed to find the buildings you want to build and the roles you need. For example, if you have no blue cards in hand, you cannot perform a "Merchant" role, which can be a pain if you need to dump cards into your vault. Fortunately there are Jacks available, which acts as wild cards for the game. Their only purpose is only for leading or following roles (they cannot be used as building materials).

The abilities of the buildings are widely varied help tailor player strategies: The cheap buildings (Brown and Yellow) include Walls (immune to your opponent's Legionnaire actions) and Latrine (discard a card before drawing when you 'think'). More expensive buildings include the Temple (increases your hand size by four) and the Catacombs (which ends the game immediately). Synergy and raw power run through these buildings makes for both tight and runaway games.

The game, whilst confusing at first, becomes relatively easy to get to grips with and becomes a joy to play (taking around 30-45 minutes). As a result, the game is popular with many gamers and the subject of an initially successful Kickstarter project.

You see, the Kickstarter project came about as a result of one major flaw of the game: the artwork. Put simply, the art is of a fairly amateurish standard and feels detrimental to the overall quality of the game as well as introducing the game to a wider audience. Enter the Kickstarter proposal to re-print the game using new artwork (AKA the Black Box Edition). One of the support levels even included a handwritten letter of apology for the artwork (which ironically would turn out not to be the last letter to be written for a long time).

Over 1600 backers (including myself) funded the project to the tune of $73,000 back in August last year. The improved card-stock and artwork preview had the potential to give the game the quality seal approval it deserved and hopefully cement it as an evergreen.

Cambridge Game Factory (the company that produced the game) then shot some albatrosses, broke some mirrors, and walked under several ladders. You see, the project of getting the Black Box Edition from Kickstarter into the hands of its backers has been plagued by everything that has delayed the project at virtually every turn. That's not to say the CGF team (run by volunteers) hasn't been transparent with the process: they had already admitted several times to the shortfalls of their ability to deliver acceptable results. The project has had a new project leader and has encountered every production, scheduling, and customs difficulty you could think of.

Certainly this reviewer wants to make clear that he is still an avid supporter of CFB and its games (another favorite of mine is Barons, which I had purchased recently) and that this GameHead review aims to put into light a great game that deserves to be played by more gamers and highlight the efforts made to republish the game with the impressive new artwork.

Business in games can be tough: reaching a wider audience of gamers can be difficult (barring exposure in webcasts such as TableTop) and profit margins are squeezed with rising production costs and ever increasing overheads. Survival can be tough and from forum posts on BoardGameGeek, it sometimes feels that CGF found 1600 fans and made 1600 adversaries out of them. Many have cited not to back another Kickstarter project again or buy another CGF product based on the fact it has taken over a year to deliver.