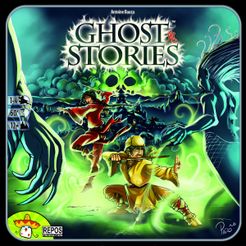 The board is made up of 9 village tiles in a central grid, and 4 game boards on the outside. The ghosts appear on the game boards and slowly move toward the village, when a ghost reaches the village it haunts one of the village tiles, and if 4 village tiles are haunted you lose the game. It is a cooperative game, so you as the player rush around the village banishing ghosts and seeking help from villagers, whose help is reflected by the abilities on the tiles.

The Temple allows you to unhaunt a tile, which is important as you cannot use a tile that has been haunted, the Pavilion allows you to move a ghost and move a priest, the Graveyard allows you to raise a dead priest and so on. The position of these tiles can make a big difference, because the central tile tends to get used most, but if a really useful tile is on the corner of the village, it can make the game more difficult.

It is a tough game, each ghost has a resistance rating shown by a number of coloured symbols, three blue, two red, two green and two black and so on. When a priest attempts to banish a ghost you roll dice that have those symbols on them, if you roll the right combination of symbols you banish the ghost. You can also collect tokens in certain colours that you can spend to gain those coloured symbols against a ghost.

All through the game you are spending tokens, collecting tokens from the village, gaining tokens by banishing ghosts, and losing tokens because the ghosts haunt the village and so on. There is a curse die that you roll occasionally, that causes ghosts to come into play, or a player to loose a life, or a player to lose all of their tokens and so on. Some ghosts cause the curse die to be rolled, so it becomes important to banish them before they cause too much trouble.

When you get toward the bottom of the deck of ghosts, an incarnation of Wu Feng turns up, and if you can banish Wu Feng you win the game. The incarnations are tough though, you generally can't defeat them with one roll of the dice, but if you have saved up enough tokens (and use tokens from priests that are on the same tile you can throw caution to the wind and gamble everything on one roll.

Ghost Stories is an excellent solo game, and is still a challenge. The game is very well designed in how you play with less than four players, as there are less ghosts and you get some tokens with which you can use the special abilities of the priests that are not being controlled by players. It still changes the balance of how the game works, but that is part of the charm because the feel of the game changes with the player count.

Ghost Stories is both exciting and frustrating in equal measure, and takes a while for the players to get used to how the game works and what the best strategies are. As a coop game it is very important to cooperate and discuss what a player intends to do. It is not a bad game in that respect compared to other coops where one player often just tells the other players what to do, because we found that players typically remind each other to use their special powers and talk about what the best next move is.

Ideally, you get to a point where the players work out what they intend to do three or four player turns in advance, because the end game can really be on the edge between victory and failure. Ghost Stories is almost compulsive, given that the games are quite short, we sometimes keep playing through the evening until we defeat it. It is definitely highly recommended.