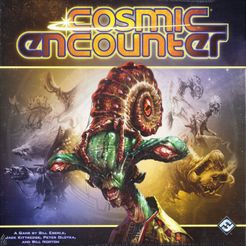 Cosmic Encounter is one of those games that leaves you wanting to play another. Sometimes a game is short enough that this is possible. Other times, this isn't the case. Why are some games shorter, and some longer? Because every game you play will be drastically different from the previous one!

There is so much replayability packed into this one box, you could easily buy this game, and not need another one for months! Get all the expansions, and you could play this game for a lifetime without ever playing the exact same game twice.

You start Cosmic Encounter by randomly drawing two alien race cards, and picking whichever one you like the best. The other is put back, and you'll be playing this alien race the entire game. These races are so different, they change how you play each and every game.

Everyone will have one of these dynamically different races, which will interact differently with one another! So even if you played the same alien twice, it might be better or worse against the new aliens the other characters are playing that game.

Just so you don't think I'm exaggerating, let me toss in how many different races there are... There are 50 different alien races in the base game, and 20-30 new races in each of the 5 expansions. That's at least 150 different aliens you'll have the chance to play!

While it is possible that you may get the chance to play as every single alien in your lifetime, I'd say it is impossible to play every single combination in your lifetime. So every time you play, this game will be different. Don't believe me? With 150 aliens, assuming you play with 5 players, that's 591,600,030 different possible combinations not to mention all the other cards that change up the game.

Once you've completed the 8 steps, it'll be the next players turn, and they'll do the same thing. You just keep following these steps until someone has established 5 different foreign colonies on the opposing players planets. At which point, they win! Will it be you?

Among my favorites, Cosmic Encounter is probably my absolute favorite. I don't think I could ever tire of playing this game, and I hope someday you'll get to enjoy it too.