Buy Carcassonne at the lowest price 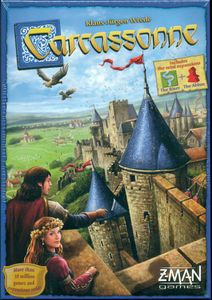 Players win Carcassonne by scoring the most points. They take turns placing tiles, one-by-one, making sure that all sides of the tile that will touch another tile correctly match.

Some points are scored immediately while some are not calculated until later. Points are scored by claiming certain combined groupings of tiles with meeples, which each player has only seven to use for the whole game.

Each player starts the game with seven meeples of matching color. The one extra meeple is used as a marker on the score board. The tiles are all shuffled together, except for the one starter tile that is identified by a different colored tile backing. The players then take turns drawing a single tile then determining where they'd like to place it.

All tiles must be placed touching an existing tile while making sure that all components on the adjoining tiles match. The three components of every tile that must match are: grassland, roads and cities. Each tile may have any combination of these three components. After a tile is placed the player can then decide whether or not to place a meeple to claim a certain portion of what that tile might create.

Placing a meeple on an as-yet unclaimed road section (now called a "robber") will gain the player one point per tile when the road is completed by it being capped off on two ends by some combination of an intersection, castle wall or monastery. When a road is completed the meeple is then returned to the player's stock pile.

Putting a meeple inside a city tile ("knight") will gain the player two points per tile (or four points for tiles with a flag in them) when the walls of that city form a complete enclosure. Again, the meeple is then returned to the owner once a city is completed.

Monasteries are claimed by placing a meeple ("monk") on the cloister and completed when that tile is completely surrounded by other tiles. Nine points (one for each tile, including the monastery tile) are earned and the meeple is returned to the owner.

Placing a meeple face down on a grasslands section ("farmer") will gain the owner three points per every completed city that is inside the boundaries of that section of grasslands. Roads typically will help form the boundaries of sections of grass. Once these meeples are placed they are never returned to the owner since their value is not counted until the end of the game.

Once the last tile is placed, the game is over and final point calculations start. Players gain one point for every uncompleted road, monastery and regular city tile. Two points per every incomplete city tile with a flag in it. The "farmer" meeples are scored now as per the previous explanation. The person with the highest point total wins!

We were originally introduced to Carcassonne via the excellent Xbox Live Arcade version that came out way back in 2007. It was one of the first purchases made by my game group when we started exploring the vast world of modern tabletop games, and it's still busted out on the regular all these years later. It's a game that is explained easily and picked up quickly by new players, perfect for new players who are used to playing Monopoly and Cranium over and over again.

Though Carcassonne is by no means a complex game, the strategy is such that you can try to guess how it's best to use a tile and what gambles to make, but much is up to the luck of the draw. Trying to build and keep control of a large city can be rewarding, but only if you actually complete it by game's end.

Meeple placement is crucial, as you always want to be scoring but you don't want too many of them to be tied up for too long or you'll miss out on opportunities for points. Score multiple, low point sets or try to stretch them out for big scores? It's something that changes every game and what makes Carcassonne so interesting and fun.